MALE MENOPAUSE. WHY THE SECRECY? 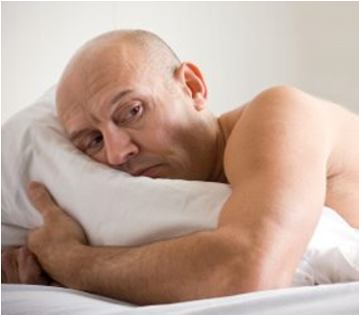 By the time they turn 80, almost all males will be carrying half the testosterone they once had. This medical fact often gets overlooked by health professionals and the mainstream media because, unlike the changes women face, this dropping away of hormone production is a gradual slide, as opposed to a dramatic shift.
Andropause, commonly called ‘male menopause’ is real and it has some interesting side effects that experts are only just beginning to understand.
The fact that men can produce viable sperm until the day they day has often been seen as proof that men don’t have to worry about staying’ vital’ in the way women do. However, testosterone does a lot more than make a man ‘a man’.
Studies show that a drop in testosterone can lead to depression, bone breakages, fatigue and impaired memory. In fact a 2007 study showed a link between Alzheimer’s Disease and Andropause.
Supplements and medication can increase levels of testosterone secretion in men, and a story on the benefits of Zinc for men can be found here on My Grey Nomads by typing in the key words Zinc and Male health in the search bar. The problem with overdoing supplements is that often items claiming to be ‘male boosting’ are often not well regulated. Too much testosterone can lead to liver problems as well as heart attacks and stroke. The idea for men is to bring the levels up to where they were when they were in their early 40’s, not to suddenly try to replicate the He-Man image they had of themselves when they were 18.
Often men worry more about libido and ‘performance’ than they do about keeping things real. Testosterone production can be improved by a healthy, varied diet (yes, boring but true) and a reduction in alcohol consumption. It does not sound very sexy to say, but men who look after their bodies by feeding them properly are better in bed for longer than guys who live life like there is no tomorrow. Also, smoking affects your blood vessels. Guys who smoke are simply not going to get as hard as fast and for as long as those who don’t.
Sometimes the reason for the decline in testosterone is out of everyone’s control. Things like surgery- even minor- or injury, can cause the body to concentrate on things other than making the hormones needed for optimal baby making. It’s not all that surprising, but when a body is concentrating on getting better, it is not focusing on how much sex you are getting.
Some excellent news, however, is that the more sex you DO get, the less likely you are to feel the effects of Andropause.
As well as being great exercise, regular semen emissions means your testes will spring into action more often and therefore produce more sperm, and equally more testosterone. There is no correlation between who you are having sex with and how much male hormone you produce, so if the only person sharing your hanky spanky times is you and the bathroom mirror, rest assured that your pituitary gland and your hypothalamus ( the guys who tell your balls what to do) do not care. They are not judging you on quality, only quantity, so if self-love is your only option, take it as regularly as you wish.
Finally, a bit of medical advice we can all get behind.
Male menopause is slowly coming out into the open, but like all things related to men’s health, it is often whispered about rather than broadcast. That has to stop. Men who are suffering from the –perfectly normal and natural- effects of a drop in testosterone need to speak openly amongst their friends and to the general public in order to remove the sniggers and taboos. It’s no big deal. As we age, our body changes, but science and the scientific world is on our side. To find out more head to www.healthline.com/health/menopause/male#Overview1 or the Online Mayo Clinic sitewww.mayoclinic.org