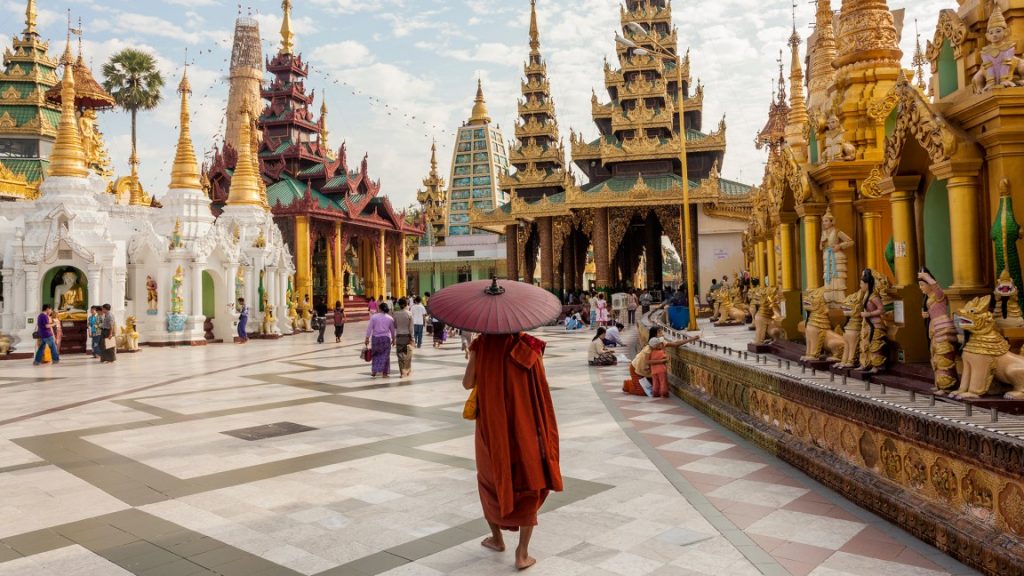 Ever since Colonial explorers headed off to the Far East there has been a fascination for Myanmar (formally Burma) within the West.
Perhaps it is the other worldliness of this deeply devout predominantly Buddhist nation or perhaps it is that, as a gateway country bordering China, Bangladesh, India, Laos and Thailand, Myanmar is a physical and cultural crossroads.
It is also a nation that has suffered its fair share of strife. Even now, with the release of the democratically elected Aung Sang Suu Kyi from house arrest and her subsequent restoration as leader of her country, there is a sense of breath-holding amongst the populace.
Continuing social unrest in regional towns blight communities and the economy, which is where Burmese suffer most. Myanmar is poor. In 2013, the Human Development Index (HDI) listed it as 150th out of 187 countries. For Asia, one of the fastest developing parts of the planet, that’s a very low number.
Tourism is growing, however, and there are plenty of places to visit for intrepid explorers.
The largest city, Yangon, (formally Rangoon) is a great place to start. Near the river, and in the ‘heart’ of the city, you will find the largest collection of British and French colonial architecture in South East Asia. True, most of it is fairly decrepit. But not all. Fans of slightly garish brick buildings harking back to the mid 1800’s will recognise the same style of architecture that can be found in Penang, Georgetown, Melaka, Shanghai, and even Vietnam. The Burmese have set up a Heritage Trust and, along with the Yangon City Heritage List, there are moves underway to keep and preserve the cities unique character. This at least means that they will remain as part of the landscape of downtown Yangon. Unfortunately, restoring old buildings that have been left to rot in monsoonal climates is difficult, and very, very, expensive. Without the financial resources to bring them back to their former glory a great number of these relics are looking a little worse for wear. Once again, Myanmar is poor. 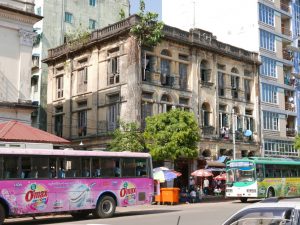 The sad state of affairs when it comes to once glorious structures holds some charm in and of itself however, and a self guided walking tour with the right amount of imagination will transport the keen observer back to a more genteel ( if slightly politically incorrect) time. Delightfully, second hand book sellers can be found with sometimes battered only copies of books that have been lovingly held onto in case of resale value. Most of these booksellers ply their trade near the architectural colonial hulks, making a walk downtown seem slightly surreal. You may sometimes wonder if time has stayed still in Myanmar, and in parts it truly has. 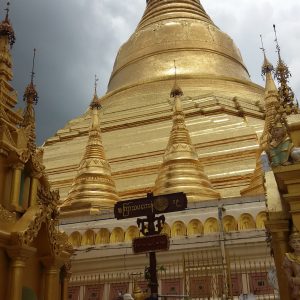 The most famous Pagoda or Temple in town is the Shwedagon Pagoda, a bright gold Stupa that is said to be the home of 4 Buddha relics. The Pagoda can be entered into on several sides, and there are lots of touristy trinkets available near the temple, some more hideous than others. The gold Stupa can be seen from many parts of the city, it is large. If you are going, and you should, remember to dress respectfully. Long pants or skirt, shoulders covered. There is a charge, but it’s worth a look. There is also an elevator on one side if climbing stairs in the heat is not your thing.
One surprisingly nice thing to do is to take a walk on the wooden pier structure that sits on top of Kandawgi Lake. This is a very pretty thing to take time out for, and is free. The lake is very popular with locals, there is a lovely park next to it with some fairly extraordinary topiary. At the right part of the pier, with the right angle, you can get a selfie with the pier, lake, trees and the glistening golden dome of Schwedagon all in one shot.
There is also a fairly large Zoo near the Pagoda which in any other country would scream Occupational Health and Safety Disaster Area, but in Myanmar seems par for the course. If you’ve ever wanted to get especially close to a Hippo, or hand feed some exotic creature not normally associated with limb retention, or you’d thought that keeping Tigers in dog box sized bare cement floor cages were a thing of the past, this Zoo will also transport you back to a more surreal ( slightly distressing) time. This zoo also boasts an extensive stuffed animal display and a Dinosaur garden. And why not, you ask?
One somewhat surprising thing in Myanmar is the number of excellent Indian and East Asian restaurants. For not much money travelers can enjoy authentic vegetarian meals anywhere in town, and there are some surprisingly good Chinese Dim Sum restaurants as well, a mark of the many trading nations that have used Myanmar as a conduit for hundreds of years.
If you have a bit more time and you’d like to explore further, an area far outside of Yangon to visit is Bagan, which was recently hit by earthquakes, but is also home to some 2200 ancient temples. Bagan has stood as an historically important area since the 9th century. If you are a fan of places like Siem Reap in Cambodia or Ayutthaya in Thailand, Bagan is a must visit.
Myanmar is not an easy holiday if your idea of Asia is Singapore style cleanliness, or even Vietnamese enterprise, but the locals are friendly, and the country is awakening and trying to move forward. For those amongst us who wish to see this historically significant nation before it changes too much, do not hesitate. As things settle politically, more money will move in and start to change the landscape forever.
For this reason alone, Myanmar is one place you don’t want to leave until last.