I’m a little confused when it comes to soups. ‘Gaeng’ and ‘Tom’ are the words used, yet without going too far into Thai etymology that nobody is sure of, they can be remarkably similar. What I do know is that their soups are ridiculously clean, balanced, and almost medicinal. Especially the ones hailing from Isaan.
My favourite, by far, is Gaeng Hed.
Mushroom soup. Possibly the best treatment of mushrooms short of simply frying them in butter. This is odd for me, as prior to tasting this, the thought of boiled mushrooms made me wince in reminiscence of rubbery, squeaky, bland…eugh. This, is somehow different. 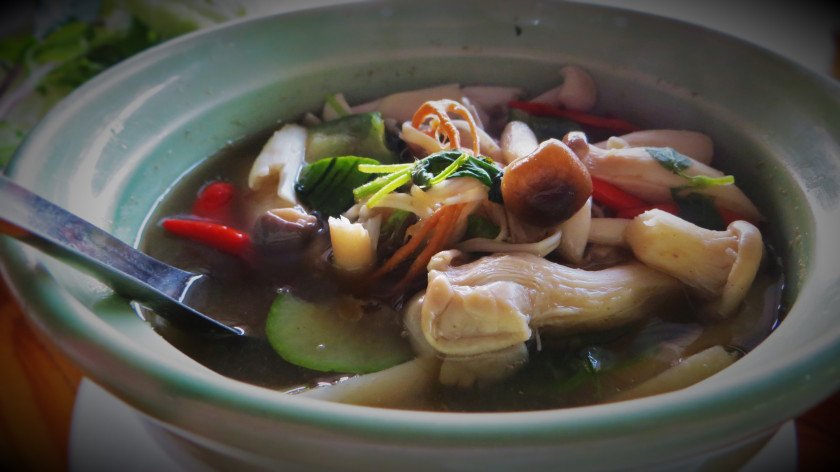 The array of mushrooms available here is remarkable. Varieties that back in the UK stretch your budget to the gourmand (but are confusingly only ever served on top of overly thick risotto) are sold on market stalls for a pittance.
I can’t quite pinpoint exactly what it is about this soup that I love. Its not the sort of thing I can put down to a texture or taste. As sad as it sounds, it is a feeling.  Never have I tasted anything that feels more like a dense green forest, earthy, and warming. The steam rising like a dense mist amongst the fungi that dot the forest floor. The colour of pine trees and moss. Ok, probably not, but you get the idea. It’s a good soup, and with a few tweaks, worth making at home. 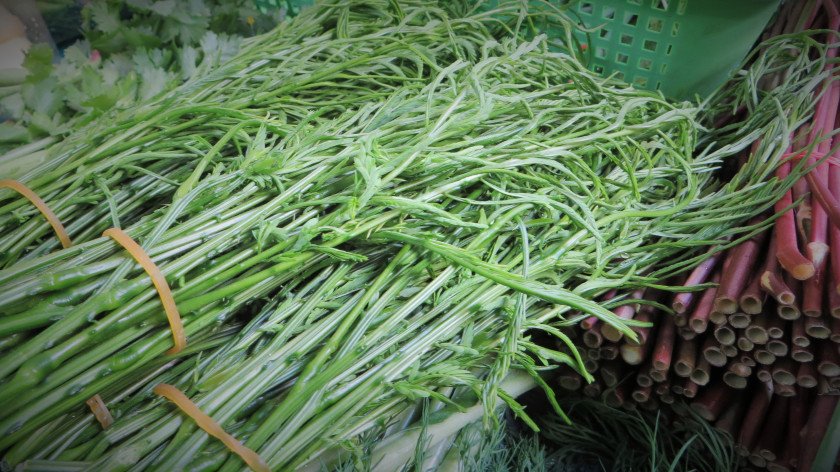 Recipe-ish
I say ‘ish’ because I’ve never had one the same, and googling seems to fetch a wider variety of recipes than make sense. I guess mushroom soup is as adaptable as its name suggests. Instead, I will just make a version that I believe is really really good, and offer suggestions for what you could change at home.
The recipe is rough and pretty open to interpretation depending on how spicy/ sour/ salty you want it.
Ingredients (serves 2)
A big bunch of Ya Nang Leaf (Triliacora Triandra, this is a leaf found throughout SEAsia and is scrunched between fingers to give off the distinct green colouring that gaeng hed should have. I’m at a loss of what to recommend but I believe similar results could be achieved with nettles or spinach.) 5 or 6 small chilies 2 Shallots A small handful of squash A small handful of asparagus or green beans A few large handfuls of mushrooms of your choosing (for this we had Oyster and Straw mushrooms) A big bunch of Cha Om (This is an acacia used all over SEAsia. Raw it has an interesting, almost eggy taste and can smell a bit off, but cooked it has a nutty sweet flavour and a meaty texture. I would suggest using very young asparagus or perhaps a small amount of samphire.) A big bunch of Thai basil 2 tbsp of Pla ra, fermented fish sauce (or half a tin of anchovies, a guessed amount of marmite) 2 tbsp of fish sauce (or salt) A thumb sized piece of tamarind (this can be bought from supermarkets but if not, a sour jam such as quince could be used instead)
***I will say at this point that these dishes were conceived and brewed from availability of produce. I would encourage anyone keen to remake this to go out foraging for green edibles that can be stewed together. 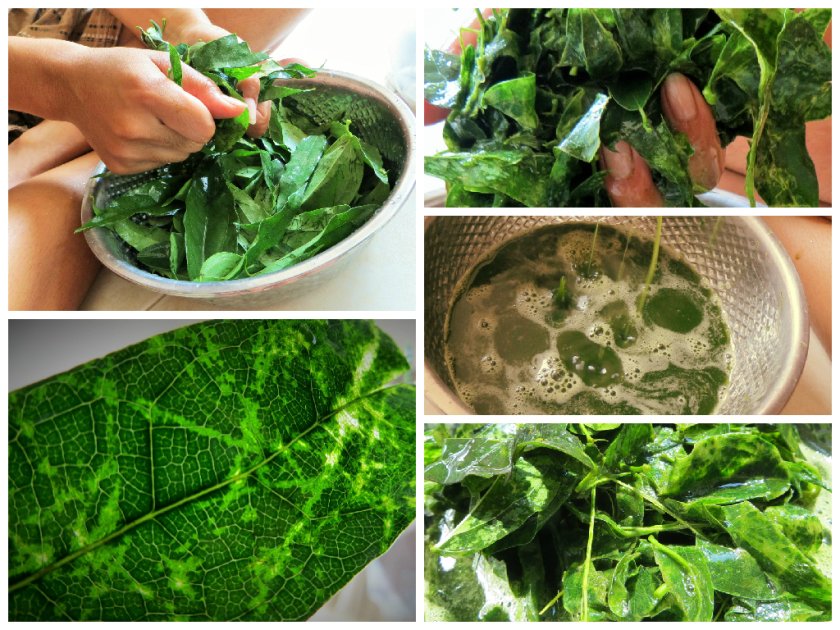 This is Ya Nang, the green leaf that Ree scrunched together to create the vibrant coloured water we used as a base for the soup. It has that ‘fresh cut grass’ smell of chlorophyll that reminded me of my Mum’s weird fruit shakes using spirulina and wheatgrass. It also thickened the water it was squeezed into, I believe it has some sort of gelatinous property. 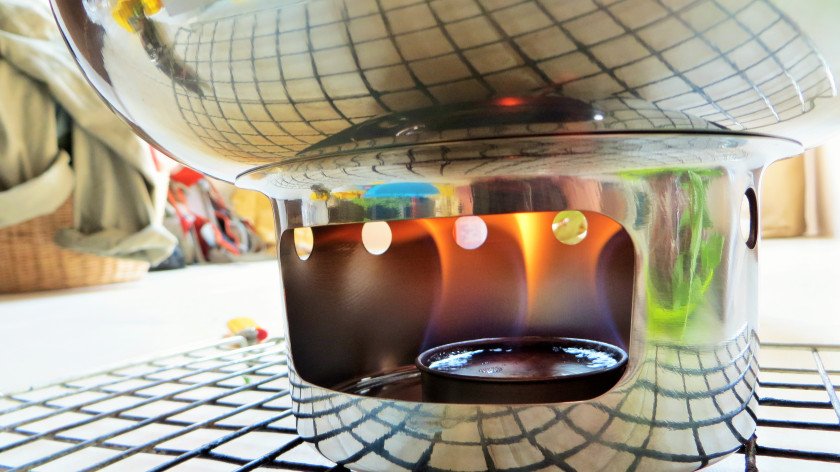 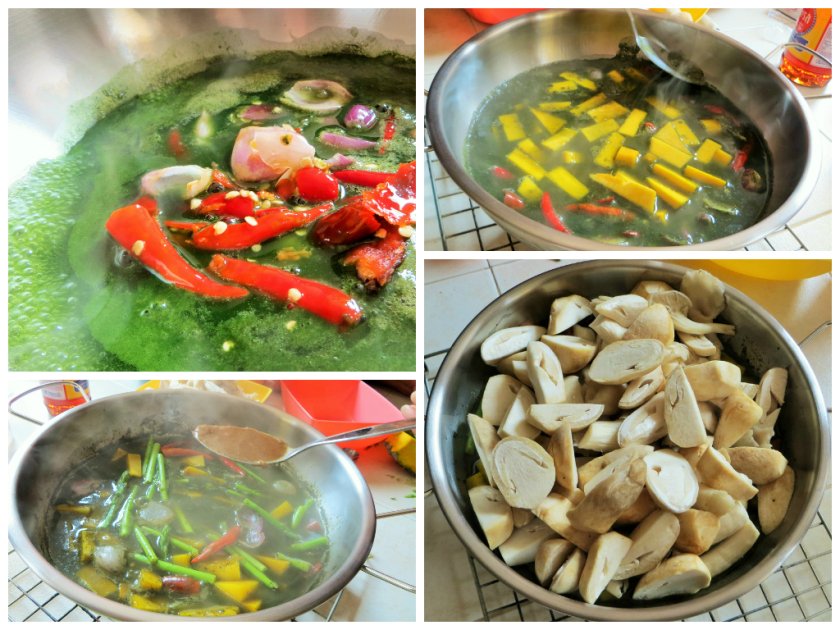 After pouring the green goop into our ghetto soup dish, it was brought to a simmer before the chillies and shallots were added. These were not cut, but instead smashed roughly in a pestle and mortar to release their flavour without making the dish too powerful.
Then the squash was added in small chunks so that it would cook quickly, followed by asparagus and tamarind. Finally the large chunks of mushrooms were placed on top of the mixture and barely stirred. We put a lid on top to allow them to boil/ steam. All mushrooms have a large water content, which was why the amount of green water we used looks relatively small. As the mushrooms cook they release alot of their water into the dish.
After about 5 minutes it was time to uncover the mushrooms and add the herbs. 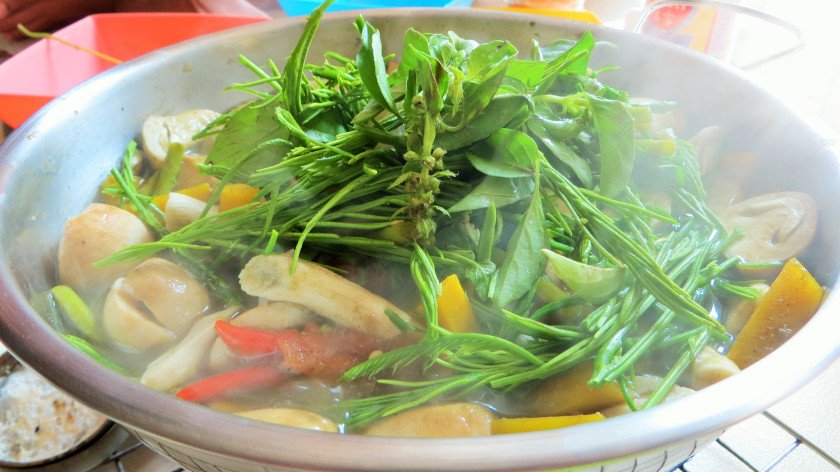 These were cooked for roughly a minute while we tasted the soup, adding Pla ra and fish sauce to taste. It’s truly amazing how different things can taste without any salt, as the Pla ra truly transforms this dish from a nice vegetable broth, into an earthy, moreish concoction, that could cure a stubborn cold.
Here is Ree looking chuffed with herself. 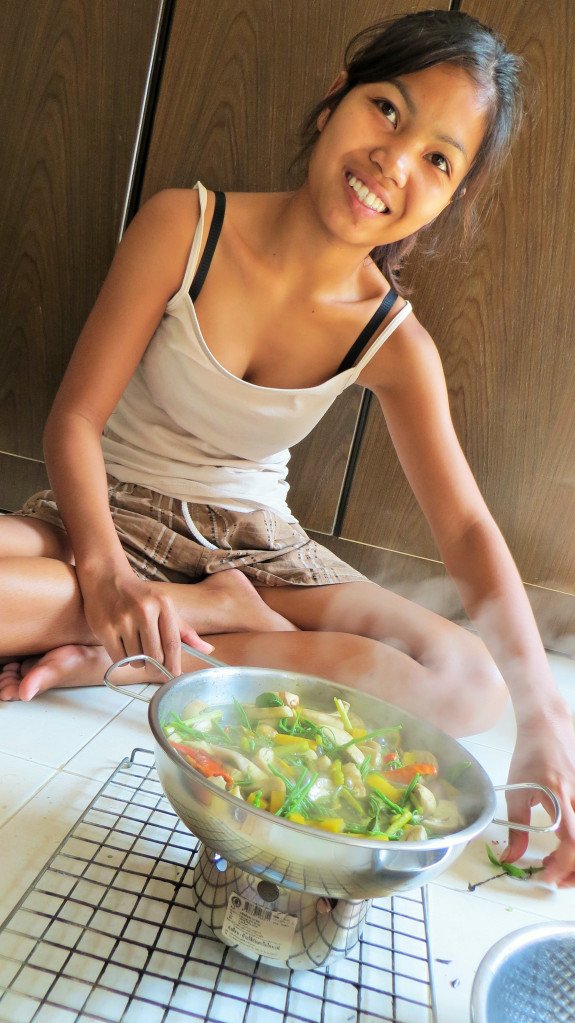 Traditionally the best way to eat this is alongside a variety of other dishes, dunked at with sticky rice. Everyone gets a small bowl and helps themselves. 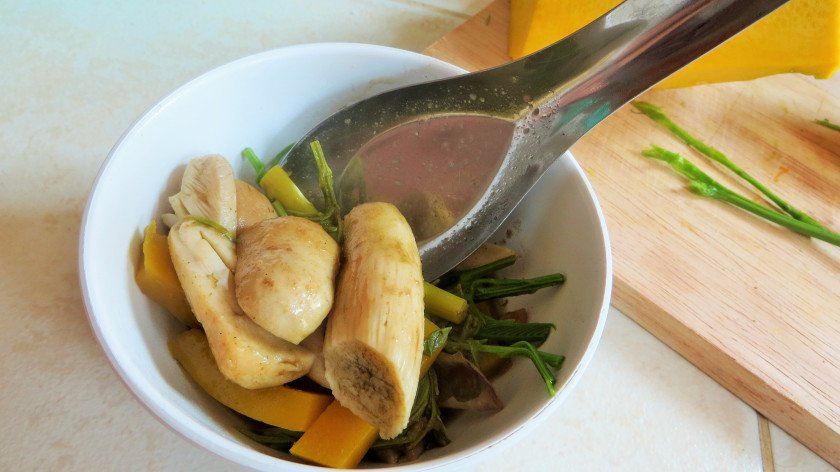